When my Students for Life group at Central Michigan University met earlier this semester to plan a chalking event to bring awareness to our organization and beliefs… I was beyond excited. But I was new. Little did I know just how much I would learn about the struggle of pro-life movement from this simple event. 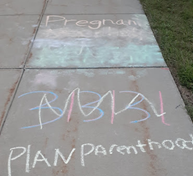 Later and armed with chalk, my group and I spread out, writing a series of messages on the sidewalk. We wrote, “Pro-Life is Pro-Love,” “Women Deserve Better than Abortion,” “Join the Movement to End the Violence of Abortion,” “Women’s Rights Begin in the Womb,” and many more.

I was excited to hear that some of us had been able to talk to students passing by and even change some minds about abortion. I knew this was exactly why I had joined Students for Life.

Before we branched off, our group’s leaders encouraged us to work near others or in groups so we would have support if we were approached. I knew that I would receive some hate for standing up for our cause but I never expected so much of it in such a short amount of time.

We only chalked for an hour, but, during this time, students on bikes dumped water bottles onto our chalk while individuals on foot scuffed their heels in an attempt to smear our words. Our male members were attacked for having an opinion on a “women’s debate.”

“Hey! You with the chalk! Keep your stupid —– opinions to yourself!” a male passerby snarled and spit on the pavement, missing my hand by inches. I looked up in shock only to see him walk away, laughing with his friend.

Despite all of this, I was happy with what we had gotten done and was encouraged by the fact that we had managed to change some minds. I never really expected anything more to come of our work that night aside from hoping someone would reach out, interested in learning more or becoming involved. I was wrong.

Not even 24 hours later, I began seeing disturbing images on friends’ social media. Videos surfaced of our defaced messages with captions like, “Political Chalk Wars”. I walked sadly across campus to see the vandalism for myself and was unable to find a single untouched phrase. Most now read as new messages, and the rest had either been smudged or crossed out until they were unreadable. 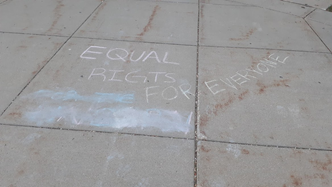 There were two vandalized messages that stood out to me more than the rest. The first phrase had originally read as, “Pregnant? Need Help? Text “HELPLINE” to 313131” and was written in two separate places on campus. On both messages, our help hotline had been scratched out and replaced with “1-800-230-7526” (the number for Planned Parenthood) or the name of that murderous organization itself. 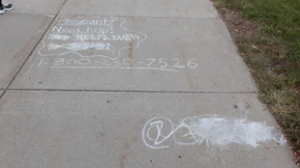 The next message struck me as more ironic than hurtful. The original chalked statement read as, “Equal rights for the unborn” and had been changed to “equal rights for everyone.” In a sad but funny way, whoever changed our chalked wording didn’t change our message; just the phrasing. Our entire mission is to ensure everyone has the basic right to life.

According to the Michigan Department of Community Health, there were 29,669 induced abortions in 2020 in the state of Michigan alone. That is 29,669 people stripped of their right to life in one year, in one state. Ending abortion is necessary if we are to attain equal rights for everyone.

A Word of Encouragement

I know that people don’t always want to hear what we have to say, and I know that our dreams of ending abortion appear near impossible at times. Seeing how fast our messages were vandalized and reading their new meanings crushed me until I stepped back and looked at the situation from a new perspective.

The fact that these people were so quick to lash out only proves that we stand a chance at reaching our goals. Our opposers fight the way they do because our dispute is founded in both morality and scientific fact. They don’t want to acknowledge our stance because, if they took the time to consider our side, they could be proven wrong. They could be shown that abortion is violence, and this realization would crush them.

This is why they fight so hard to tear us down. They shame us for our beliefs and try to silence our voice because they don’t want to be forced to consider our side. When you encounter  vandalization, don’t be brought down- be encouraged. When you hear vicious comments or see hateful actions, keep your chin up. We are being heard.